If only they realised what sort of evil powers were at work...

There is a dark lord plotting his evil plans. He goes by the name Cowell. That is...
Simon...Cowell.
He is very cleverly scheming to take over the world, slowly and slyly without anyone realising.
And he is succeeding. Oh yes, he is. He has a massive entrepreneurial enterprise.
He is a British fellow-although, it shames me to admit this. He placed his base in the UK, and started his massive business. No one had predicted how big his business would become. But big, it did become. Immensely big. And so, he made another base in America, and in countries all around the world.

Picture it. You're in Britain. It's cold and rainy Saturday, and everyone's indoors in front of the TV. Unfortunately, it is Autumn. And do you know what that means? Every Autumn right through to Christmas... a horrible, slimy thing, creeps onto the television sets of vulnerable Britons in the form of....

This show has immense power.You cannot even begin to comprehend how powerful it is. ﻿Millions of people turn up to watch at times. 8 million to be precise. And that's if it's not the results show. There are only so many people in Britain you know. And every year, there is a winner, who sings a soppy ballad and nomatter how out of tune he is or how much everyone hates the song, it is ALWAYS, ALWAYS number one in the Top 40.

And every year, the magazines plaster pages upon pages with fictous stories about the X factor, and everything X factor related. Everywhere you go, everywhere you turn, there's always something to do with the X Factor. You can never, ever escape it, and you will never, ever escape it, even if you hide under your bed, and say you're never coming out. The judges faces' are on your shampoo bottles.You search in the newspapers for information on the recent floods in Pakistan, but no, all you find is an article telling you one of the x factor contestants is being deported because her Visa has expired or something like that. When so, so, so many inncoent people get deported every day, but no one even cares about them.

Let me tell you a little story.
There was once a little girl  with a monobrow, frizzy hair and very disgusting teeth. She was a rough girl, who was always getting in fights. She worked as a waitress in a bar. She decided to try her luck oneday, and entered in a band competion. She couldn't really sing, but that was alright, she only had to stumble through a verse at most. Luckliy, her group won, as they showed their bums the most. She got her teeth fixed with some surgery, waxed her monobrow and got a hair stylist. After that, she married a footballer. Still, she was nothing special. No one really noticed her.
Until...
She worked as a judge on the X Factor.
And now...
SHE IS CALLED, THE NATION'S SWEETHEART.

Do you understand yet how powerful this show is?

Every year...every single year...I have to put up with this horror. I have to sit and cry as it slowly crushes the music industry. Because this...this is fast food music at it's absolute worst.

Musicians are hard working people. They have to spend ages performing at dodgy bars and get a part time job as a cleaner before they make it big. And everyday, they have to worry about paying bills, and about whether or not they should have stayed in school and become something sensible, instead of being in a band and not earning enough for their family. They stay up all night writing songs, they get guitar calluses. They have to work very, very, very hard. And in the end, it's very likely they'll die and no one will remember them.

But the people on the X factor simply appear...in all their cockiness, they just appear...and get voted in depending on looks and popularity rather than talent. And then, some stupid sod wins, and sings a song someone else has written, and it becomes number one.
Just like that. Instant fame. Instant success. Instant pleasure for the 'public'. Instant food. Or, rather, fast food.

The fluffy teenage girls vote for the young teenage boys that they're madly crushing on. (there's always, always one, this year it's this soppy thing called One Direction). The others who think they're being different, vote for the pretty girl they wish they could be. And the old ladies vote for the cheeky charmer they wish was their husband. 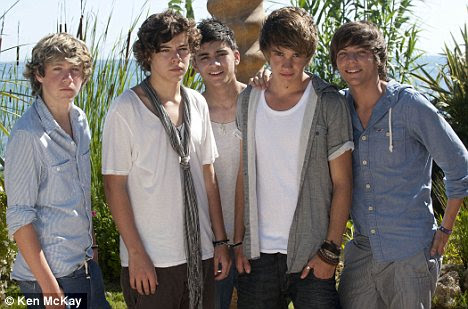 Picture it. It's a Monday morning in rainy London. You walk into school. You are instantly attacked by mad girls shrieking ,"OMG, OMG, did you watch the X factor, it was soooo good!" and "Oh, Rihanna's performance was so good, but Bon Jovi just ruined it all...ugh I hate rock music" and "Oh my God, I think Cher should win, she is sooo good. But I don't like that guy with red hair...he's butterz (London slang for ugly)"

You calmly tell them you don't watch the X factor. They stare at you in disgust, and quickly move away. You're not 'cool'. You have nothing to talk to any of them about, you're quickly excluded from the conversation.
You pick up the Metro that someone's left lying around. You soon regret it. It's stuffed full of X factor articles. Nevermind the war in Sri Lanka that no one knows about.Because Sri Lanka's not as interesting as the X factor. No, it's more interesting to read about how so and so missed a note in their song, or how someone else is wearing a hideous outfit.
You go to assembly, hoping you can escape it all. No. The head teacher is giving a speech about the X factor, and talking about how we should think about other things as well as TV. Yes, well how can we forget about the X factor if you keep on mentioning it?
Throughout the whole day...the teachers...people in the hallway...the receptionist...they're all talking about the X factor.

WHY?! Why does no one realise what a bloody SCAM this all is?! Simon Cowell is a dark lord at work here, he is earning billions of pounds, at your expense, every time you buy an X factor record or vote for someone on the show, you give him more money. Cowell is ruthless. He doesn't care if he ruins the music industry, he doesn't care as long as he gets his money. To be truthful, the X factor is more about the judges than the actual performers. Ooh, what is Cheryl Cole wearing? Ooooh, don't you think Simon was a bit harsh.All the faux bickering going on between the judges. Someone is always 'headed to the final' or 'deserves to be in the competition'. To be honest, I think Simon Cowell is vain, and wants the show to be all about him, which is why he is always thinking of new , cruel comments to give to the contestants. He knows it's only going to get him attention. 'You sounded like cats trapped in a bag.' Ok Cowell. You've had your fun. You're world famous from Tokyo to New York. You earn about $90 million a year (yes, I didn't believe it either) When will you stop? Exactly. When he controls the world.

Never mind Cowell. What about the music industry being corrupted? Well, no need to worry. This fast food music...some of the winners are forgotten and never remembered. Four out of six of the winners so far have been forgotten after a couple years. Leona Lewis and Alexandra Burke are the only remembered ones. And you have got to admit, this is all very impressive considering all the hype that went on when they were on the show. So, why are they all forgotten so quickly?

Well, sadly, it's not because the public's music taste has improved. No, with the media, the general public will never improve their music taste. The reason that they're forgotten so quickly is because, like I said before, this is fast food music. Instant gratification, no staying power. Next year, there's a new winner, and everyone forgets the old one. The same happens every year.

Most of my readers here are from America, and so they won't be familiar with the X factor. Well, I'm sure you've gathered it's like your 'American Idol'. By Cowell as well, as I'm sure you know. I don't watch the American Idol, so I don't know if the winners have staying power or are forgotten. But I'm sure it's pretty much the same.

Once...some time ago...my friends were trying to persuade me to go on the X factor.  Yes, you heard right. They thought I had a nice voice (bah is all I have to say). But regardless, I'm glad I didn't go. If I ever do make it in the music industry (and that is if I did decide to )I don't want to be an act everyone forgets about in a couple of years time. I want to be an act that people remember years after I die, I want everyone to still be singing my songs years after I die.
Thank you very much, but I do not want to be another burger lying in the bin. 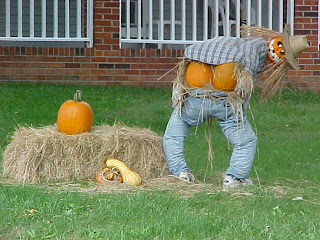 Humph. I'm quite disappointed with myself,  for the past few days I've been trying to think of a post I could do that was both Halloween, rock related and interesting.
You've probably logged on thinking, oooh, she's written another interesting blog post! (I flatter myself...interesting-hah!) But instead, you're left with me rambling... once again.... I've probably already wasted two minutes of your life.
Ok, right, this is my attempt at writing a Halloween blog post...I shall TRY to make a list of scary rock songs, that are somehow Halloween related. Just in case you were bored of listening to the Monster Mash and Thriller.
Sympathy for the Devil: The Rolling Stones
Ok...maybe this isn't that much Hallowen related. But it has the word 'devil' in it, ok? It's the best I could do...
I'm very sorry guys for no video, but here's a link:
http://www.youtube.com/watch?v=iLddJ1WceHQ

Highway to Hell: AC/DC
You have obviously seen the word 'hell' in the title of this song? Good. Now you know why it's on this list.
http://www.youtube.com/watch?v=TziyOcb96q0
It's quite cute how they're all wearing devil horns :)

OK, now, on a more fun note, here are some pictures of hamsters wearing clothes!!! 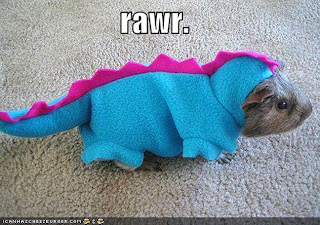 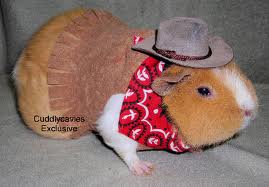 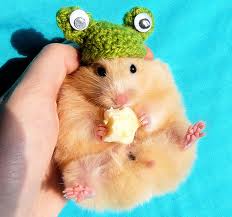 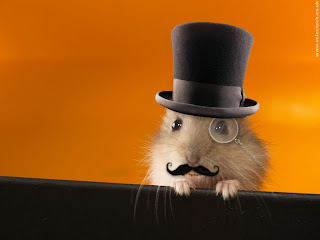 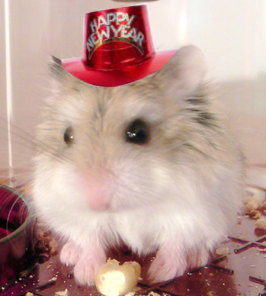 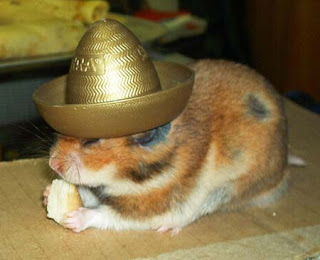 YAY for randomness and wasting people's time!!! Now, what are you still doing here?
Posted by Zee at 12:07 10 comments: