How much for a concert ticket?

I remember there was a time when I would laugh bitterly in the faces of fools who spent ridiculous amounts of money on designer clothing. It's all very well going into hundreds for quality...but...thousands? Really?
"That white blazer you bought for £2000? Yeah, well I bought one almost identical for £25 in a sale. Put that in your juice box and suck on it."
What irritated me the most was that all that money, if donated to charity, would go a long way. It could feed a family in a poverty stricken country for at least a year. Is an item of clothing really worth someone else's life?

And then I thought...well shouldn't the whole 'ridiculous waste of money' concept apply to concert tickets?
Exhibit A: Glastonbury Festival, UK

See, the fact is, there are some people in the world that will pay any amount of money to see their favourite band/ musician.
But what about the people who would pay any amount of money to see the band BUT JUST DON'T HAVE THE MONEY?
I went to see Paul McCartney last year in the o2 arena...I paid £45, but Macca's team were so sweet they had these guys (good-looking guys I might add) go around giving tickets to the front row that were originally hundreds. And...yours truly was one of the lucky people to get free front row tickets!
It was a once in a life time experience but then I thought...
Hang on..
What about the people who had actually decide to spend hundreds on tickets?

What had made me want to bring up this particular subject is the Rolling Stones' high prices for their concert in London. The cheapest ticket is £106. If you want Mick and Keith to be anything more than spindly stick figures in the distance, prices go to £406.


And a VIP hospitality ticket, which guarantees a place inside the terrifyingly-named "tongue pit" at the edge of the stage, is £1,140.

I understand why The Rolling Stones have put the prices so high. They're up there with the other "gods" of classic rock, like Led Zeppelin, The Beatles and Pink Floyd. They're probably thinking, "Hey, it won't be long till we're in wheelchairs so we might as well milk those rich pigs who always wanted to see us as teenagers but never got the chance."

What's sad though is the high prices mean that the arena will probably be full of wealthy older men and the occasional spoilt kid whose parents have decided to indulge them. For the younger generation, The Rolling Stones will not be as accessible.

And then...back to the point earlier. Isn't spending £1,140 for a VIP ticket as self-indulgent and pointless as spending silly amounts on clothing, or a hotel room?


And to you: how much would you happily spend on a concert ticket?
Posted by Zee at 14:13 12 comments:

The Monkees: one of the most influential sixties bands or just another Beatles copycat?

Just a month ago, I watched a mediocre BBC TV program about the Beatles' influence on America. They spoke of how the Beatles' visit to America created a massive infestation of "Beatlesque" bands (see, it was so common they had to create a name for it!), such as The Lovin' Spoonful and The Hollies, both of which in my opinion are bands in their own right with incredible songs. The TV program mentioned the Monkees only briefly, saying they were a band designed  specifically to replicate the style and music of the Beatles at the height of Beatlemania (hell, all you have to do is look at their names). After watching a Hard Day's Night, U.S. T.V. producers thought that a T.V. show about a band would be a good way to make money, and they were right,  so the Monkees were born. They had the majority of their songs written for them and didn't even have to play the instruments, all they had to do was smile and look attractive on their T.V. show. Sounds like a simple job, huh? 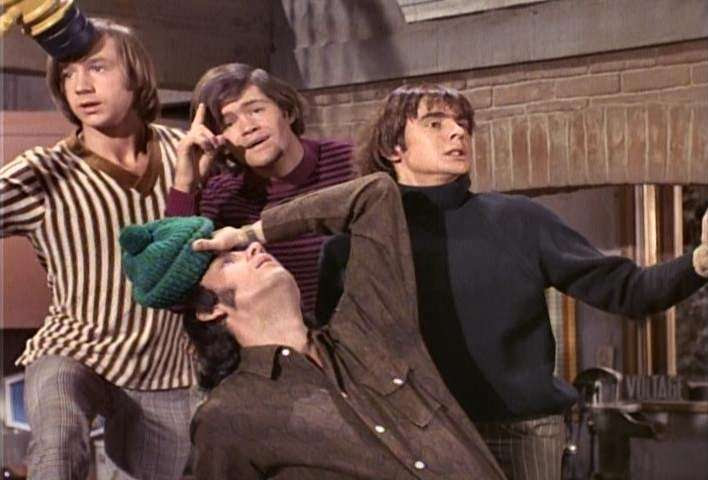 What the BBC program failed to mention  was that the Monkees would in fact outsell  the Beatles and Rolling Stones combined, and would have four consecutive Number 1 albums in the year 1967 alone (now that is a lot of money, though I'm willing to bet the band members only received a tiny fraction of it). This was not your average Beatle copy-cat.

In fact, there's a sweet little story about when the Beatles and the Monkees met. The Beatles very kindly hosted a party for them when they visited England, and Nesmith asked Lennon if he thought they were a cheap imitation of him. Lennon replied that he thought they were the greatest comic talent since the Marx brothers, and that he'd never missed one of their programs. The Monkees were no longer simply a "Pre-Fab Four" as they now wrote some of their own songs and played their own instruments, as well as going on tours. Their life was busy and far more stressful than most people realised, as the band rushed from interview to TV filmings.

I disagree with people who say compare their talent to the likes of One Direction (how could anyone, even bloody dare! It's blasphemy at it's worst). They're an incredible band that have made a lasting impact on music.

Had the BBC program been made a couple of months later, I'm sure it's tone would have changed in light of Davy Jones' death. Davy Jones was considered by many to be the most lovable of all the Monkees (did you know he acted in an Oliver! musical in London?), and how unexpected his death was is part of why it is was so tragic. I'm sure that if he could see what was going on down here, he'd be the slightest bit consoled that some of The Monkees' albums are now on the Amazon best-seller list.
If you're new to the Monkees and this entire article has seemed as confusing as Chinese (unless you're Chinese), then watch a couple of the following videos and see if you like them. If you like the Beatles, there's a 95% chance you'll like the Monkees (is it even possible to dislike the Beatles?...)

So what do you think? A band in their own right?
If any of you are interested in further reading on them, here's an excellent article on the Monkees and how their impact on music:
http://www.hollywoodreporter.com/news/how-davy-jones-monkees-changed-hollywood-297757
(this has been written late at night without proper proof reading, I apologise if it's not well written)
Posted by Zee at 14:48 12 comments:

Email ThisBlogThis!Share to TwitterShare to FacebookShare to Pinterest
Labels: The Beatles, the Monkees

I feel absolutely horrible for being away so long...
WAAAA
But I'm here to let all of my loyal followers know (I could never apologise enough for being away) that I'm still alive and kicking :)
And my music taste has changed incredibly, I think I can safely say I know a lot more about classic rock now than I did before :)
So, you can expect a slight change in blog layout and a proper blog post coming up very soon!